Few weeks ago, at Dubai Airport, I bumped into Mammootty, the iconic Malayalam Actor.
https://en.wikipedia.org/wiki/Mammootty

I had just finished my work in Dubai and was taking my usual night flight to Bangalore. There were just two other passengers besides Mammootty and me at the security Check. We finished our security check and continued to the elevator which would take us to the Duty free. I ended up facing him in the elevator and naturally, started talking. I told him that my Mom was a huge fan of his and would kill me if I didn’t take a picture of us together. He was very gracious and asked me to go ahead. I took a selfie inside the elevator which didn’t come out well because it was too dark. He insisted that we could take a pic in better light. Once the elevator reached the top floor and we got out, I asked one of the two passengers in the elevator (who were Germans) to click a picture of us together. Here it is: 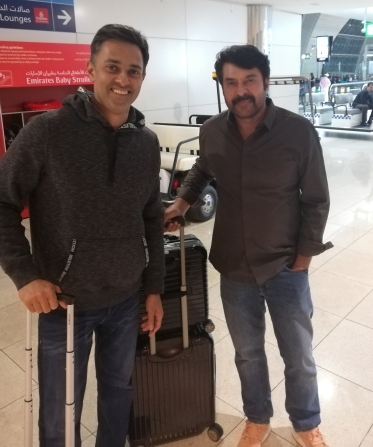 I asked the Germans whether they knew who this man was. They had no clue. I tried to educate them and Mammooty had a good laugh observing my efforts to do so. He remained an unrecognizable face till we reached the Duty free shops. Once we reached there, he was instantly mobbed by every Malayalee who spotted him.

I thought about this whole episode during the flight back to Bangalore. It was actually quite liberating. Here was an individual who was among the most successful actors in South India. Someone who had achieved fame, fortune and respect beyond our wildest dreams; and yet, 99.9 percent of the world had no clue who Mammooty was. This man, who couldn’t step out of his house in Kerala without being mobbed, meant nothing to most people living in Germany.

Kevin Kelly described the concept of a minimum viable audience better than anyone else in his classic article titled “1000 true fans”. If you are a freelancer, this one is a must-read: https://kk.org/thetechnium/1000-true-fans/

2 thoughts on “Mammootty and The Minimum Viable Audience”

This is a text widget. The Text Widget allows you to add text or HTML to your sidebar. You can use a text widget to display text, links, images, HTML, or a combination of these. Edit them in the Widget section of the Customizer.